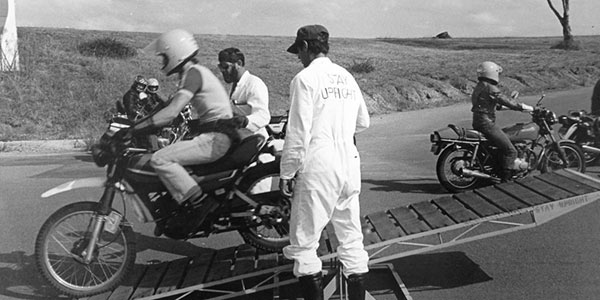 Back in 1966, I lived in Florida (USA) – but with a return to Australia looming, I knew I needed to get a job that would involve bikes. The plan became me joining the NSW Police Force and, after a brief stint in General duties at Newtown Police Station, I arrived at St Ives (NSW) for the three week motorcycle course. Mission accomplished!

Clearways  were opening up all around Sydney and required lots of Police on Motorcycles to keep them clear.  I did that for about three months, then the chance to do the Motorcycle Instructor course came up and the rest is history. The next 12 were spent instructing Police Riders. At that time there was only about 550 Motorcycles in NSW!

I was playing Rugby Union and in the Bilgola Surf Club, so the thought of having every weekend off and no shift work was appealing  to me. Those 12 years with Police Driver Training gave me the idea that training people to ride safely on our roads was needed for the general public.

On many occasions people would ask where they could go to learn to ride – there were not many options! The Police school was only for Govt Departments and the Army at the time. On Public Holidays, the School was open to the Public, where we put on riding and driving displays.

After years of procrastinating about setting up a school for learner riders, a friend of mine and former school instructor, started up Stay Upright Pty Ltd.

The name came about from the catch phrase used when I was stationed at the Special Traffic Patrol headquarters under the approach to the Sydney Harbour Bridge – “Stay upright!” were the words we yelled to each other before riding off.

During those years I decided to look at how training was conducted in the USA so I went and completed the MSF (Motorcycle Safety Foundation Instructor Training). There were three of us from Australia at the time and we all agreed our teaching methods were the best to promote rider safety in Australia. Our teaching was avante garde at the time, it still is, in that it’s the motorcyclist’s duty to keep themselves safe, no matter who is at fault. Don’t put yourself in bad positions, make good choices, take responsibility for your own actions.

From 1981 to 1989, we ran Pre-Licence courses in NSW and the ACT.  The ACT was the first Territory to make it compulsory for Learners do a course before getting a certificate to ride. It was not until the early ‘90s that it became compulsory in parts of NSW. We then started to do post Licence training in most parts of Australia.

To this date NSW is the only State still subsidising rider training. Victoria and Queensland use an accreditation system and NSW is  a Tender system.

We have a long way to go before all States and Territories are on the same training page – it would be a great thing if Instructor training was the same in all states, for instance.

Our roads have become so crowded these days and riding on a good open road through many corners is becoming harder to do without traffic. Riding in that traffic is all about treating every driver you see with the thought that they have not seen you.

The distractions facing a driver now is higher – texting behind the wheel, for instance, is deadly. Riders must be aware that a large percentage of drivers out there have never sat on a motorcycle, never known anybody who has one, nor had any relation to motorcycling – therefore it’s not front of mind for them to look out for us. One of the most important  aspects of operating on the Public Streets is CONCENTRATION! Our concentration, that is, to make up for their lack of it.

Find the right course for you, right now

Simply select your state, select what you’re interested in and we will point you in the right direction!